StoryFutures is a project run by the Royal Holloway University of London to innovate storytelling using immersive technology. Young people in the Warwickshire House Project are working with Avril (Virtual Reality Director) and Joel (Lecturer in Forensic Psychology) on the StoryFutures Project to explore the development of digital technology that could support young people leaving care.

I was really keen to get involved in this project as I am a huge fan of Virtual Reality (VR), have good knowledge of its capabilities and love the idea of House Project’s having a VR element.

From the first session I joined, I could see that the group had bonded as a team. Everyone was excited about the project and the opportunity to design something that, if developed, could really benefit young people leaving care.

The ideas that were coming from the group were amazing and everyone was involved and encouraged to join in. There was discussion about having a VR space that everyone could meet up and socialise in which would have different doors so that you can walk from one base to another, allowing young people in The House Project community to meet up no matter where they are in the Country. It could even be used to host conferences and meetings!

The ideas did not stop there…

The group went on to speak about having a “virtual library of experiences”. The library would include important life events and experiences (such as ‘attending a job interview’ or ‘moving home’) which would be viewable to others. There would be a voiceover from a young person speaking about how they were feeling at the time and providing words of advice to their peers that could be used as a resource for others preparing for similar experiences.

During a mapping activity, young people in the group spoke about their own experiences throughout their House Project journey. This included everything from their application and interview, to moving home, getting jobs (and losing jobs), setting up bills and having their friends around for the first time. Young people picked out the experiences that they felt were the most important ones to include in the ‘library’, shared what they wished they had known before, and shared advice they had for others experiencing similar things.

If the ideas generated are developed further in the future, young people involved will get the opportunity to attend further planning sessions and the be involved in the filming of the ‘library’.

I think having access to a resource like this would be massively beneficial to The House Project community; it offers a new and exciting way to communicate and access support virtually.  I’m grateful that I was able to be involved in such an amazing and innovative project and I look forward to being involved in the next steps!

The Big Give Christmas Challenge: help care leavers achieve their hopes and dreams!

This year The National House Project will take part in the Big Give Christmas Challenge Campaign. From Tuesday 30th November to Tuesday 7th December the Charity will seek donations which will be matched funded by the Big Give.

Mark Warr thought he’d put away his trainers for the summer but has decided to dust them off for a brand-new festive fundraising run, taking place at Apollo Buckingham Health Science Campus, Crewe on Saturday 27th November. The Run will be in aid of the Charity he heads, The National House Project, a unique charity helping young people on their journey from leaving care. 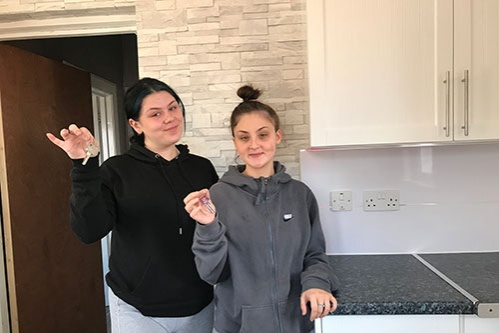 On the first anniversary of a ground-breaking Midlothian Council project, nine care-experienced young people are being supported to live independent, fulfilled lives.